Salamander was created by Eric Bishop
Salamander photograph by Brian Gratwicke
Salamander is not affiliated in any way with Ubuntu/Canonical Ltd. 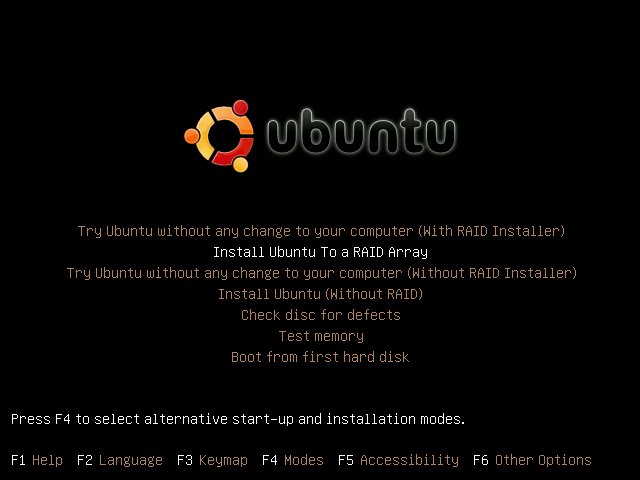 The first few steps of the install process are identical to those in the standard installer. Only the disk partitioning steps are different. In the first RAID-only step, the user is asked to select which physical disks should be used in the RAID array. The total size of each disk, along with a list of existing partitions, is displayed. All disks checked will be completely reformatted, so be careful! By default all disks are checked: 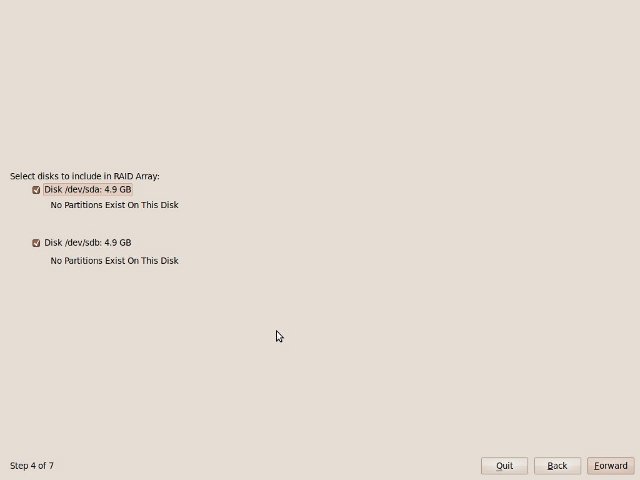 Next, users must select the desired RAID level, file system, swap size, and email configuration. To learn more about RAID levels, see the wikipedia article on the subject. It is worth mentioning here that while RAID Level 5 may seem attractive for its low cost, it is also the least reliable. Refer to the BAARF (Battle Against Any RAID Five) website for more information on this topic. If you are setting up a simple two-drive configuration, mirroring (RAID Level 1) is probably best.

You can select a swap size up to 4GB (4096MB), and the ext4, ext3 or xfs filesystem. Google recently announced that they use ext4 file systems (the default filesystem) in their data centers. If it's good enough for them it's probably good enough for you. Therefore, you probably should use ext4 unless you have a compelling reason not to do so.

Finally, it is recommended that you configure your system to send you an email alert if there is a problem with the RAID array. This will alert you if a disk has failed and needs to be replaced. To avoid the hassle and complexity of configuring and maintaining a local SMTP server, emails are sent using a remote SMTP server. You can send mail using the GMail SMTP server, or configure a custom one. Users may find configuring GMail easier, as only a username and password are required. One caveat is that the email password is stored in plain-text, though only the root user has permission to view the script where this is stored. If you are uncomfortable with this, you may uncheck "Configure Email Notification on Disk Failure", and email notifications will not be configured.

All other install screens are identical to the default Ubuntu installer. Just wait for the files to copy and your new system should be ready to go.

During installation 2 RAID partitions are created: One containing the root file system and one that is used as a swap partition. A separate /boot partition is not needed as the GRUB2 bootloader used in Ubuntu 9.10 and later can boot off of a RAID partition of any RAID level. Previous versions of GRUB could only boot from a RAID Level 1 partition.

Recovering After A Disk Failure

Sooner or later one of the disks in the RAID array will fail and will need to be replaced. When you replace the failed disk it will initially be blank, and it will be necessary to reformat it and include it in your RAID setup. Salamander provides a script to do this for you, located in /usr/sbin/raid_repair. Upon installation the parameters of your RAID configuration (RAID level, partition size etc.) are hard-coded into this script, making it easier to use, but potentially incompatible with a different installation.

This script takes only one parameter -- the name of the disk to be formatted and added to the RAID array, e.g. /dev/sdb. Note, you need to send it the disk device, not an individual partition (e.g. from the terminal prompt type "/usr/sbin/raid_repair /dev/sdb" not "/usr/sbin/raid_repair /dev/sdb1"). Be careful, when you run this script any existing data on the specified drive will be lost! After you have physically swapped out a drive with the new one the new drive should be empty. To be sure you're going to format the right one you can open up a terminal and run "sudo fdisk -l" to get a list of all drives, drive sizes and partitions on each. The one you want is the one without any existing partitions.

Once you have physically swapped the disk and you're sure you're formatting the right drive, run the script. If you have configured email notifications you should get an email telling you that the array is being rebuilt. You will get progress emails as each quintile (20%) of the rebuild prodedure is completed, and one final notification when the drive is fully repaired.